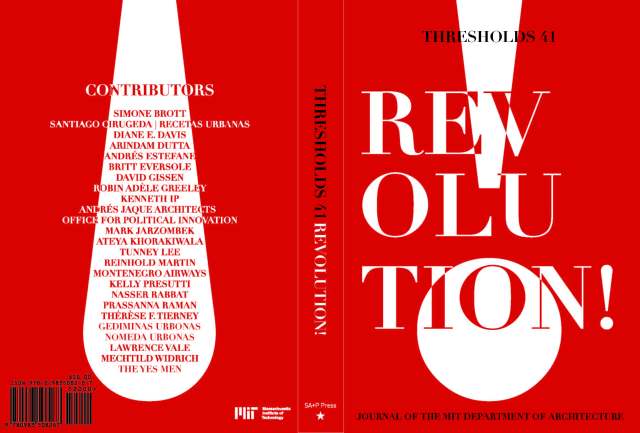 i just edited thresholds, the journal of the MIT department of architecture. thresholds 41: REVOLUTION! is available for download here.

What actions are prompted by revolution in the space of the city? Which publics take part in this struggle, and who are the agents that mobilize it? And after a revolution has subsided, how is it remembered, represented and memorialized? thresholds 41: REVOLUTION! turns to the history, design, and cultural production of the public realm as a site of dissensus. Rather than focusing on a specific revolutionary time and place, we have strived to include different periods and regions, organizing contributions in terms of the relations they establish between sites, actors, and contexts. In the essays and designs featured in these pages, political struggle often shifts established roles—agitators create new types of public space, designers become activists and fundraisers, individual figures fade in favor of collectives or groups, and actions are best remembered through misrepresentation. How do we write revolution, who writes it and for whom? And, in turn, how does urban conflict inform writing, design, and cultural production at large? Our authors, designers, and artists open up revolution as subject, as event, and as historiographical problem—a problem complicated by discrete actions, multiple publics, critical practices, and the politics of display and remembrance. [keep reading on issuu]